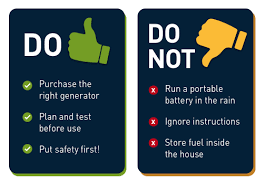 Never run a generator in an enclosed space or indoors. Most generator-related injuries and deaths involve CO poisoning from generators used indoors or in partially enclosed spaces. That includes the basement or garage, spaces that can capture deadly levels of carbon monoxide. Always place the generator at least 20 feet from the house with the engine exhaust directed away from windows and doors.

And if you’re using a generator to keep the lights on during a cleanup effort, use a working, battery-operated carbon monoxide detector at the same time.  A carbon monoxide alarm provides one more layer of defense against making an innocent but potentially deadly mistake.

Don’t run a portable generator in the rain. You can buy tents for generators—that keep them shielded but still well-ventilated—online and at home centers and hardware stores.

Before refueling, turn off a gas-powered generator and let it cool. Gasoline spilled on hot engine parts can ignite. Allowing the engine to cool also reduces the risks of burns while refueling.

Stock up on extra gasoline and store it properly. When you think you’ll need to use the generator for an extended time, you’ll want extra fuel on hand. Just be sure to store gas only in an ANSI-approved container in a cool, well-ventilated place.

Adding stabilizer to the gas in the can will help it last longer, but don’t store gasoline near any potential sources of heat or fire, or inside the house.

Avoid electrical hazards. If you don’t yet have a transfer switch, you can use the outlets on the generator—providing you follow certain precautions: It’s best to plug in appliances directly to the generator. If you must use an extension cord, it should be a heavy-duty one for outdoor use, rated (in watts or amps) at least equal to the sum of the connected appliance loads. First check that the entire cord is free of cuts and that the plug has all three prongs, critical to protect against a shock if water has collected inside the equipment.

Install a transfer switch before the next storm. This critical connection will cost from $500 to $900 with labor for a 5,000-rated-watt or larger generator. A transfer switch connects the generator to your circuit panel and lets you power hardwired appliances while avoiding the glaring safety risk of using extension cords. Most transfer switches also help you avoid overload by displaying wattage usage levels.

Don’t attempt to backfeed your house. Backfeeding means trying to power your home’s wiring by plugging the generator into a wall outlet. This reckless and dangerous practice presents an electrocution risk to utility workers and neighbors served by the same utility transformer. It also bypasses some of the built-in household circuit protection devices, so you could end up frying some of your electronics or starting an electrical fire.

Carbon monoxide can kill you in as little as 5 minutes if the levels are high enough, according to safety guidelines from the National Institutes of Health.

What is carbon monoxide?

Carbon monoxide, also known as CO, is called the “Invisible Killer” because it's a colorless, odorless, poisonous gas. More than 150 people in the Unites States die every year from accidental nonfire-related CO poisoning associated with consumer products, including generators. Other products include faulty, improperly-used or incorrectly-vented fuel-burning appliances such as furnaces, stoves, water heaters and fireplaces. Source: Consumer Product Safety Commission

Know the symptoms of CO poisoning

Because CO is odorless, colorless, and otherwise undetectable to the human senses, people may not know that they are being exposed. The initial symptoms of low to moderate CO poisoning are similar to the flu (but without the fever). They include:

By accepting you will be accessing a service provided by a third-party external to https://www.wtmorris.org/